The Race Question in the 2020 Census: How Should a Jewish Person Respond?

I just completed the United States Census 2020 form online. For the first time in the history of the census, the question about race requires a secondary response. I didn’t have any difficulty selecting “White,” but didn’t know what to enter for the secondary response. So, I skipped it. 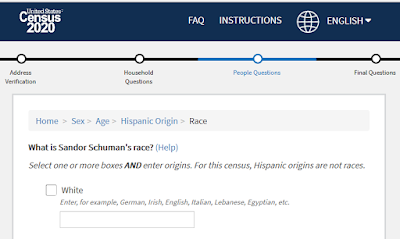 Oops. I was unable to proceed with the census survey. I had to fill in that box.
The question reads:


What is (your) race? Select one or more boxes AND enter origins.

All those examples correspond to a country, a geographic are where your people came from, a name that identifies “your people.”

My people spoke Yiddish, which is, as Maurice Samuel put it in In Praise of Yiddish, “the language of a people in exile.”

My father’s family lived in what is now Ukraine. It could be they left to escape the pograms of the late 19th century or, as my sister put it, “to achieve a higher level of poverty.” They lived for a short time in England, where my father was born, prior to arriving in the United States. My mother’s family lived in what is now Russia and Poland. But, we are not “from” England, Ukraine, Russia, or Poland. Those places do not identify my “origins,” my “people.” I know little about Ukraine, Russia, and Poland and most of what I do know is how badly they treated my people. So, I did not want to fill that response with any of those countries.

I considered “Jewish” as a response, but “Jewish” is not a country of origin or a geographic place; it can be interpreted as only a religion rather than also an origin, cultural identity, ethnicity, or people. (Indeed, some people would consider it risky to identify themselves in an official government document as “Jewish,” a move that has had disastrous consequences in the past.)

I considered “American,” which, although apt, does not recognize my Jewish origins. I read up on the differences between “Jewish American” or “American Jew” (for examples, see “Are you an American Jew or a Jewish American?” or “Educating Future Jews: Jewish-Americans or American Jews?”) but still was not satisfied.

Apparently, I am not alone. An NPR article, “2020 Census May Ask White People To Get Specific About Their Ethnicity,” discussed the issues in 2017, while the census questions were still under development. But, the issue is much older, evidenced by the article entitled “The Race Question in American Immigration Statistics,” published in 1949.

Wondering how I should respond, a line from the NPR article returned to my mind. It referred to a hypothetical respondent who, confronted with a list of fixed-choice checkboxes, might think, “I'm Sephardic ... and there's no place for me here.”

Given the flexibility of a fill-in-the-blank response, and my desire to give a response that had a geographic basis and also identified “my people,” I typed “Ashkenazi.”