More Sides to Another Side to the Story

“No single story captures the full complexity of real-life events … even the stories told by those whose practices and beliefs we reject can be as coherent and compelling as our own.”

I came across this statement at the end of an article written by Moshe Simon-Shoshan that explores the nature of a conflict that took place 2000 years ago (involving the throwing of etrogim at a person) and its parallels to a contemporary one (involving the throwing of eggs at a group of people). I couldn't resist calling attention to the concluding line, quoted above. The full story: At the Wall, is it Religion — or Politics?

There is always another side to the story.
Posted by Sandy Schuman 1 comment:

When I heard my first story about Bill Greenfield, “the goldarndest liar,” my fascination with tall tales turned into a decades-long quest. Was he a made-up character like Paul Bunyan and Pecos Bill? Or was he a real person from upstate New York? Here is my introduction to “Bill Greenfield, The Goldarndest Liar,” which appeared on Story by Story, the TV program hosted by Kate Dudding and Joe Doolittle.

Posted by Sandy Schuman No comments: 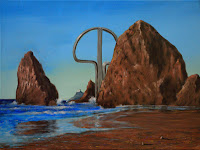 The Hamilton Hill Arts Center needs musical instruments for its new jazz band. It’s a good cause, serving inner-city youth. Joe Doolittle’s inspired story  about Hamilton Hill* motivated me to give them my son’s saxophone. We bought it for him fifteen years ago, and his interest in the instrument long since faded. I asked my son, Sam, if it was OK to donate it. Without hesitation he said yes.

As I readied the saxophone, I contemplated Joe’s story. I thought, one good story deserves another. In exchange for Joe’s excellent story I would send him another in return. But as I thought about that story I began to have second thoughts about parting with this saxophone.

Five-year old Sam was already settled into bed – half covered by his quilt, thumb in his mouth, blanket pressed to his cheek. Anna, sitting on her bed as usual, was not wanting to have to go to bed quite yet.

I walked across the room to tuck them in and noticed, in the middle of the floor, my father’s old trumpet case. Sam had apparently pulled it out from underneath the bed. I had just been helping his older brother Ben practice his piano, and I thought perhaps Sam was feeling a bit jealous.

“The saxophone …”, he said, and I recalled hearing him say this once before, but tonight it struck a familiar chord, “… and the trumpet.”

Wanting to explore this further, I presented the dilemma. If you could learn to play only one, the saxophone or the trumpet, which would it be?”

He removed his thumb from his mouth to think for a moment and rolled over to look up at the ceiling. “Both,” he said, with the resolve that he had solved the logical requirements of the question.

“Settle into bed now,” I addressed myself more to Anna than to Sam and tucked her in, “and I will tell you a story. It’s a true story, not the kind you read in story books. It’s a story that I heard, and my sisters heard, when we were children, and maybe your cousins have heard it too. It’s a story that my father used to tell about when he was growing up.” Sam knows – I wonder if I remind him too often – that he is named after my father; and Anna knows that she is named after my mother.

I picked up the trumpet that Sam had taken out and, noticing how Sam and Anna’s eyes followed it, placed it carefully back in its well-worn, purple velvet-lined case, closed the hinged top, snapped in the clasps, and pushed it back under Sam’s bed.

“When my father was nineteen years old …” I started, and then interrupted myself. “Do you know how old nineteen is? How old is Ben? … He’s ten. Then you turn eleven, then twelve, and thirteen ...” Anna picked it up and counted with me. “... and then nineteen. When you’re nineteen, you’re in college, so you’re not all grown up yet, but you’re big.”

“Can you drive a car?” asked Sam, looking eager for the prospect.

“Yes, you’re allowed to drive a car if you have the money to pay for one. But when my father was nineteen he didn’t go to college.”

“Because his family was poor and he couldn’t afford to go to college. He had to work,” I said. “He had learned to be an electrician. Electricity was a new thing then and people wanted to have electricity in their houses. But my father loved music. He wanted to write songs and play music. He didn’t have an instrument, though, and he didn’t have the money to buy one.” Sam and Anna were listening with unusual intensity. I continued.

“So he put an advertisement in the newspaper, The Philadelphia Inquirer. The advertisement said, ‘I will wire your house for electricity in exchange for a …’” I paused and pointed to prompt Sam. He filled in “‘… saxophone.’” “That’s how badly he wanted to have a saxophone, and that’s the only way he could think of to get one. He received only one response to his advertisement. But the man didn’t even have a saxophone, all he had was a …” again I paused and pointed to Sam. “… trumpet,” he filled in again with a smile of satisfaction. “Have you heard this story before?” I asked.

“Then how do you know the answers?” I asked, not knowing what to expect for an answer.

“I can just tell from the way you’re saying it.”

I continued. “Well, the trumpet was the only offer he got, so he took it. That’s how it came to pass that my father studied the trumpet, and the trumpet became his instrument.”

“Is that it in the case there?” Sam asked.

“Yes, that was my father’s trumpet, Sam, but I think he bought a better one than that first one he got when he was nineteen.” We had many hugs and kisses then, cozy with endearing emotions. It’s hard to know what this story means to a boy of almost-six and a girl of just-turned-four. Harder to know what it will mean to them in 40 years.

I heard this story many times as a child, and I have thought about it and told it many times as an adult. I have always dwelt on the fateful, by-chance aspects of the story of how my father happened to play the trumpet, which became a big part of his life, the instrument he played until, at age 84, he died. But never, before this night, had I wondered why in the first place he wanted so much to play the saxophone!

There are so many questions I would like to ask him. Why, in all of his stories did he so rarely tell about his father and mother? How did he find the time, the energy, to write all those songs? Why did he bet on those particular lottery numbers? How did he pull through those hard times? Questions and more questions. Questions so dear I can’t write them down.

He paused only briefly, his five-year old mischief grin mixing with his almost-six look of knowledgeability. He removed his thumb from his mouth just long enough to answer. “Because, it sounds cool.”

Would my father have given the same answer? I’ll never know. But how could I part with this saxophone? This saxophone that connects my son to my father and to this story? My father never took me aside and said, “Sandy, one day you'll want something really badly – it will be your heart's desire. But it won’t work out just the way you wanted. Make the best of whatever comes your way.” No, he never gave me that lecture, he just told me this story about a saxophone. How could I give it up?

But it’s a saxophone, a musical instrument – one that’s been locked in a box, silent, for years. Shouldn’t it be put to greater use? Shouldn’t an aspiring kid in Hamilton Hill have the opportunity to learn to play the instrument of his dreams, to create a new story?

So I will give it up. I will donate Sam’s saxophone to the Hamilton Hill Arts Center.

But I will keep the trumpet. 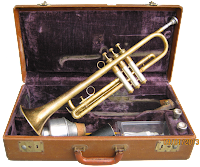