My Problematic Claim to Fame

I was a winner of the Liars Contest at the 2019 Susquehanna Folk Festival.

But no one will believe me!

To avoid exposing the true liars, the Liars Contest was not recorded. However, since my story was an accurate presentation of what actually happened, I am happy to present the following transcript.

Please note: The attendees at the Susquehanna Folk Festival needed no explanation of local details. For others, a few explanatory notes may be helpful. (Feel free to contact me regarding any other details.)

Here is my report, as given from the stage at the
Susquehanna Folk Festival Liars Contest.


I suppose you all know we’re in York County, but I didn’t know until I had a run-in with the York County Sheriff. He was going to fine me for littering. “Keep Pennsylvania Beautiful.” Hoping he would relent, I explained everything. He said, “Mister, I’m taking you in. I know just the place for you.” And he brought me here and said I had to explain it all to you. So, here I am.

You see, I’ve been reading a book entitled, The Pioneers, subtitled, The Sources of the Susquehanna. It was the first of five best-selling novels by James Fenimore Cooper with a character called “Leatherstocking.” I can see from all the heads nodding that you know what I’m talking about. The Leatherstocking Tales.

Anyway, reading this novel about the famous Leatherstocking, I wanted to see his cave, located on the steep mountainside above Otsego Lake in the part of New York the old-timers call “Leatherstocking Country.” If you’ve made the pilgrimage to the Baseball Hall of Fame you’ve been there, even if you didn’t know it. So, I hiked up there, and just as I got to Leatherstocking’s cave, what comes charging at me but a polar bear! Now I met this polar bear once before, up in the Adirondacks, and I knew he was making his way from the North Pole to the South Pole. You see, that bear was bipolar.

I didn’t want to be that bear’s breakfast, so I had to act quick. I could try to outrun him, or I could jump off the mountain. Luckily, I jumped off the mountain. As I was falling the 600 feet from the mountain down to the shore of Otsego Lake, suddenly I knew the answer to the great question about life, the universe, and everything. I wanted to write it down right away because, once I smacked into the ground, I was apt to forget it. So, I reached into my backpack for a sheet of paper. That paper was fluttering so wildly I had to hold onto it with two hands, and it billowed up above my head, and glided me down to a gentle landing on the shore of Otsego Lake.

I looked back up the mountain but, I was feeling pretty low. So, I reached into my backpack for my pot. I selected a nice hand-sized rock from the shore of the lake, and I hammered that big aluminum pot into a canoe and flattened my cook spoon into a paddle.

I paddled that canoe down Otsego Lake and there, at the southern end, was a sign said this was the source of the Susquehanna. It was such a tiny stream, I couldn’t believe it. I don’t believe anything unless I read it on the Internet because “the Internet is a credible and reliable source of information,” and that’s a direct quote from Abraham Lincoln. So, I figured I’d paddle down this little creek and see for myself if turned into the mighty Susquehanna.

After a distance, I got tired of paddling, and hungry too, so I was not displeased when the creek turned into Goodyear Lake. I figured I would catch me a fish. I saw a nice walleye down there, so I reached into my backpack and got my magnifying glass. Now a lot of old-timers use the magnifying class to concentrate the rays of the sun directly on the fish, and cook it down there in the water, but I have found that tends to cook the fish unevenly. The way I do it is to focus the sun’s rays just below the fish, so’s to heat up the water under the fish, and the upwelling of that warmed water lifts the fish right up. As it broke the surface, I reached out and caught that fish in my hand, filleted it with the sharp edge of my paddle, and played the magnifying glass across it so it cooked up evenly. It was the best magnifying-glass-caught-and-cooked fish I’d ever had. OK, that might be an overstatement. It was maybe only the second-best.

Fortunately, my attentiveness to that fish kept me from being distracted by all the people waving and hollering something about the Colliers Dam at the end of Goodyear Lake. The 35-foot drop over the dam and the rushing rapids below presented a welcome change of pace and speeded my journey considerably.

I won't bore you with how I trained a pair of muskies to tow the canoe, or the recipe I developed for a kudzu and loosestrife burrito. I will tell you this. As the river got bigger, I began to think this really was the Mighty Susquehanna and I had paddled down from its very source! But, as I was coming close to what I thought was Harrisburg, right there in the middle of the river, was the Statue of Liberty! I got suspicious and thought I’d better check my whereabouts. So, I paddled over to the shore and beached the canoe just past Yellow Breeches Creek. That’s when the sheriff fined me for littering. I give him credit. I’d be lying if I didn’t admit my hand-rock hammered canoe and paddle looked like garbage, even though you and I know different.

Anyway, I explained it all to the sheriff, and that’s when he brought me here. He offered me a piece of advice. “Mister,” he said, “if you say you paddled upstream from the Chesapeake, it will make a better story.”

“Sheriff,” I replied, “I wouldn’t lie just to tell a better story.”

The First Word Spoken on the Moon Owes a Debt to “Old Kinderhook”!

In Houston, they say the first word spoken on the moon was “Houston.” As Neil Armstrong said, “Houston, Tranquility Base here. The Eagle has landed.” But in New York, and especially in Kinderhook, we know differently.

In the late 1830s a verbal fad emerged from Boston. Using comically misspelled words and their initials, a common phrase such as “no use” became “know yuse” or “K.Y.”; “no go” became “know go” or “K.G.”; “enough said” became “nuff said” or “N.S.” Like all fads, this one died, with one notable exception.

The use of “O.K.” for “oll korrekt,” a comic misspelling of “all correct,” first appeared in the Boston Morning Post of March 23, 1839 and was soon picked up by other newspapers. 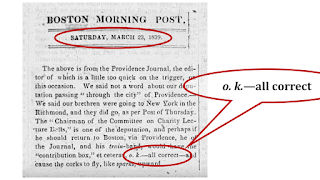 The use of "O.K." would have been another short-lived fad except for the 1840 presidential campaign. Martin Van Buren, a native of Kinderhook, New York, ran for re-election as President of the United States during a weak economy that many blamed on him. To bolster his image, his campaign recalled “Old Hickory,” the nickname of the popular former president, Andrew Jackson, and called Van Buren “Old Kinderhook.” 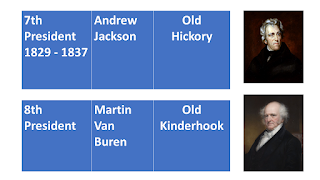 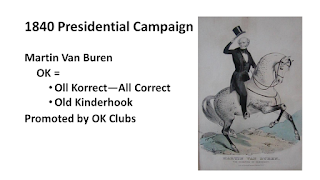 The opposing candidate, William Henry Harrison, turned this to his own advantage by using “OK” to denigrate Van Buren, calling him “Out of Kash,” “Orfully Konfused,” and “Orful Katastrophe.” Harrison won in a landslide. 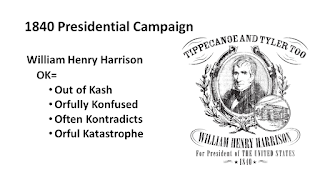 Propelled by the presidential campaign, “OK” soon became entrenched in American English and has since been adopted by many languages. Arguably, it is the most popular word in the world.

As for the first word spoken on the moon, listen carefully to the recorded voices of Buzz Aldrin and Neil Armstrong as the Eagle approaches the moon. You will hear Buzz Aldrin say, “contact light” (at 0:39), meaning the 67-inch probe beneath the lunar lander contacted the surface and, four seconds later, “OK, engine stop,” meaning the Eagle came to rest on the lunar surface and the engine was turned off.

“Old Kinderhook” would be proud. 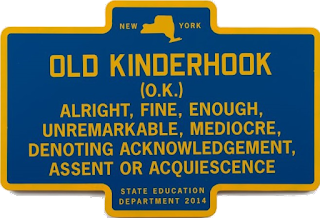 Note: This much-abbreviated history of “OK” is in debt to Columbia University Professor of English, Allen Walker Read, who published a series of six articles on the subject in American Speech in 1963 and 1964. His research was summarized and expanded by Allan Metcalf in his 2012 book, OK: The Improbable Story of America's Greatest Word. 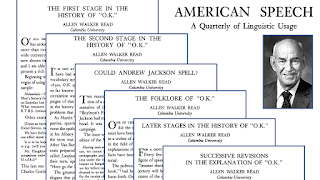 Use of the "Old Kinderhook" historical marker is courtesy of Christopher Kline, author of O.K. – The Musical.
Posted by Sandy Schuman No comments: