We’re in the Same Boat, Brother 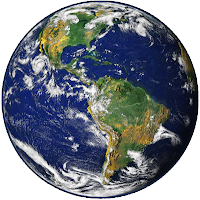 (aka “We Are in the Same Boat Brother”)

(Links to various recordings are below.)


We’re in the Same Boat, Brother

Oh the Lord looked down from his holy place
Said, “Lordy me, what a sea of space
What a spot to launch the human race.”
So he built him a boat for a mixed up crew
With eyes of black and brown and blue
And that’s how come that you and I
Got just one world with just one sky

I couldn’t make out all the words from Lead Belly’s recordings so I turned to the World Wide Web expecting to find the lyrics without any difficulty. However, after much searching, I found only recordings and videos of the song by Lead Belly and an even larger number by Bhupen Hazarika, a popular Indian singer of whom I had never heard. Finally I found a forum where a few people were carefully listening to Lead Belly’s recordings and piecing together the lyrics line by line. And then, more than four years after the original inquiry was posted, someone posted the authoritative lyrics from The Collected Reprints from Sing Out!: The Folk Song Magazine, Volumes 7-12, 1964-1973 pp. 110-111.* And this source showed the song was not a folk song, not written by Lead Belly, but rather by E.Y. Harburg (words) and Earl Robinson (music). It was written amidst the strife of World War II and was featured in Norman Corwin's hopeful CBS radio program, Unity Fair, which aired on July 3, 1945, just days after the signing of the United Nations Charter on June 26. (You can hear the song at minute 22:00 of the show, sung by the One World Chorus.)

Still, I couldn't figure out the chords to play on the guitar. I searched for sheet music and finally found a song book entitled 12 Negro Spirituals published in Denmark! Most vendors who showed the booklet said it was "not available." One seller, in the UK, would sell it for about $10 plus $25 shipping. So, expecting that it would be available from one of the larger university music libraries, I requested it via inter-library loan. When finally it arrived, it bore the stamp of Det Fynske Musikkonservatorium, now the Danish National Academy of Music, and was sent airmail from Esbjerg, Denmark. I felt guilty for the expense! 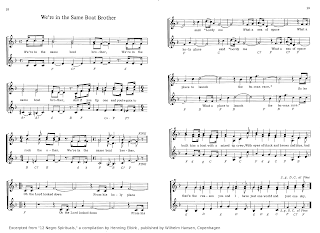 * You can order a copy of the song from Sing Out! magazine.

Bhupen Hazarika did more than anyone to internationally popularize "We're in the Same Boat Brother" (which he typically sang as "We are on the same boat, brother"). In many of the related accounts, the song is incorrectly attributed to Paul Robeson. When Bhupen Hazarika was studying at Columbia University in New York City, he knew Paul Robeson and might have learned the song from him. Paul Robeson undoubtedly knew Earl Robinson, who wrote the music for the song; Robeson recorded other Robinson songs such as Ballad for Americans and Joe Hill.

Here is some additional background information from various sources.

Composed originally in the waning days of World War II, this song was a popular folk-style appeal for the United Nations. Leadbelly was enthusiastic about the song and sang it constantly. The composers are a distinguished team. Earl Robinson, many of whose songs have appeared in these pages, is composer of “Joe Hill,” “Ballad for Americans,” “Lonesome Train,” “House I Live In,” “Black and White,” and scores of other works. E. Y. “Yip” Harburg is best known for the libretto to “Finian's Rainbow.” He is also author of the lyrics to the songs in the film version of “Wizard of Oz,” and lyricist for that depression classic, “Brother Can You Spare A Dime?” Harburg and Robinson also collaborated on “Free and Equal Blues.”

The usual relationship between folk music and the composer is where the latter discovers some of the beauty and excitement in a folk song and says to himself , ‘I can do something with that.’ So perhaps he arranges it simply or complexly, for an interesting group of instruments, or even a full orchestra, moving the folk song onto a new level. Some composers immerse themselves in a folk style so well that they don‘t find it necessary to quote exact tunes, but create new works while still giving the feeling of folk derivation. Men like Vaughn Williams, Bartok, Villa Lobos come to mind.

As a composer I have taken part in all these processes. But it has been my particular fortune to also have the opposite happen. Huddie Ledbetter, (perhaps the king of all the folk singers), not only took sections of the “Lonesome Train” to sing, but liked “The Same Boat, Brother” well enough to make it his own. If you listen to his recording sometime you will hear the folk process at work, in reverse so to speak.

Yip Harburg and I met in Hollywood early in 1944 and out of this came not only some movie scores but songs like “Free and Equal Blues” and “Same Boat.” The latter received an early climactic performance in San Francisco over the CBS network at the formation of the United Nations. Since then it has had no similar large scale performance. But it has made its way around nevertheless, through hundreds of copies distributed by the Y.W.C.A. plus the inexorable folk process. Still a good idea for singing.

Introductory notes: Who Put the Rainbow in the Wizard of Oz?: Yip Harburg, Lyricist, by Harold Meyerson, Ernie Harburg, p. 217.

Another [high point in Yip’s career as the bard of left liberalism] was to come the following spring after the San Francisco conference that established the United Nations. Radio producer Norman Corwin put together a live broadcast from San Francisco that CBS carried nationally. It was entitled “Unity Fair,” and Yip provided the songs and some of the script as well. The broadcast was almost an anthology of Yip’s popular front work: it included performances of “The Son of a Gun Who Picks on Uncle Sam,” Meet the People’s “It’s Smart to be People,” and a new Robinson-Harburg folk song, “The Same Boat, Brother.” The new entry was directed against postwar isolationism and intended to promote a one-world perspective—indeed, it was given its inaugural performance by the One World Chorus.

Here are links to various recordings.


Kevin Russell and Shinyribs at the Albino Skunk Music Festival: