Pete Seeger's 1959 Tribute to Lead Belly: Living in the Country

After years of searching, I found Pete Seeger’s 1959 tribute to Lead Belly, a unique rendition of Pete’s well-known 12‑string guitar instrumental, Living in the Country. 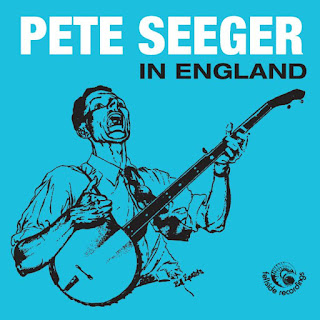 
This friend of mine, who died just ten years ago this December, was during his life very little known outside of a narrow circle of people who loved his music. His music never got on the hit parade, until after he died. Six months after he died, his song, Goodnight Irene, sold about two million copies. Huddie Ledbetter didn’t play very fancy guitar, but what he played was so powerful, he couldn’t help but impress people; very straightforward.

What follows is a one-minute Lead-Belly-like instrumental that gracefully transitions into a 1¾ minute version of Living in the Country as I heard it for the first time in the ’60s. For that story, click here.

Pete Seeger in England is a 2016 re‑release by Fellside Recordings of two previous albums, Pete Seeger in Concert Vols. 1 & 2, recorded October 4, 1959 at the St. Pancras Town Hall, London, and a recording made of his concert in February 1964, at Free Trade Hall, Manchester. The recording is also available on Amazon. You can hear the beginning of the track on Amazon's UK website, here: I Knew Leadbelly.

Here is the description of Pete Seeger in England provided by Fellside Recordings:


The legendary American Folk singer’s career had been seriously knocked off course by the McCarthy witch-hunts into Unamerican Activities in the USA affecting artists believed to be communists. At one stage Seeger was facing a ten year prison sentence, but he managed to visit the UK in 1958. The concert was recorded and issued by the Folklore label which emanated out of the Dobell’s record shop on Charing Cross road in West London. In 1964 he was back again and at one concert, at Manchester’s Free Trade Hall, he was recorded again.

Both concerts on this DOUBLE CD FOR THE PRICE OF ONE set are typical Seeger material of that time. He talks about his friends Leadbelly and Woody Guthrie and champions new songwriters like Tom Paxton and Malvina Reynolds. The concerts also give a wonderful insight to how Seeger worked an audience and had them eating out of his hand. His ability to engage the audience is an object lesson for young performers. The Folklore LPs had limited circulation and the Manchester concert has never been heard before. The booklet comes with an informative essay about Pete Seeger by Joe Stead.